Docker and Microsoft have announced the release of Docker Desktop for Windows with WSL2 support.

What it really means, is that an Ubuntu 18.04 distro can be the endpoint for Docker (more distros might follow).

I do recommend (strongly), to have a look on the following blog posts from:

And now that we are all set, this blog post will explain how to had a Kubernetes endpoint to the wsl context and, thanks to the always awesome interop functionalities, make it accessible from everywhere.

As usual, I do not take anything for granted, so here are the tools that we will be using:

IMPORTANT: please follow the blog posts and the links above for installing the different components. The installation of those components will not be covered in this blog post. Makes it shorter to read.

Setup: it’s all about contexts

Right after the Docker installation is done and the WSL 2 Tech Preview is activated (through the menu), we have the following contexts:

TIP: if the wsl context is not the default (marked by an * near the name), run the following command:

As we can see, the context do not have any kubernetes endpoint or even an orchestrator set.

So let’s add one with our beloved K3d.

Wait, why not using the default Docker Kubernetes?

And that’s a very good question. The issue here is how Kubernetes is setup within Docker Desktop.

First we will need to add the same kubernetes endpoint than the default context. To do that, we will use the config file:

This actually would work great from Windows Powershell as kubectl would also leverage the config from $HOME\.kube\config:

However, from wsl, even if we set the variable KUBECONFIG to the docker kubernetes config file, we will face the following issue:

I won’t go to much in-depth here, specially because I still have to find a solution. But if someone knows how to access it, then please feel free to share.

K3d to save the day

Back to our topic on how to add a kubernetes endpoint from WSL?

First, a new docker context as the default context cannot be modified:

Then, a new k3d cluster will be created:

Finally we can add the kubernetes endpoint do the context created:

NOTE: as you can see in printscreen, it seems to have a “visual bug” with the default context. Upon restart of the daemon, the context will be correct again

While we have now both wsl contexts configured, there are literally not the same.

And talking about contexts, we have also the kubectl contexts that are misaligned:

While we will not be able to use the Windows context (for now), the other way is actually possible.

So let us “pass” the KUBECONFIG variable from wsl to powershell and add it to the wsl context on Windows side:

And to ensure everything works, let’s also update the KUBECONFIG variable from Windows:

NOTE: ensure to separate the paths by a semicolon “;” as we are in Windows, and not the usual colon “:“

All the technologies seem to work very well together and while I faced quite some (tough) challenges, the overall setup feels quite nice.

Still, I really think that the moment we will be able to use the Docker Desktop Kubernetes endpoint from the Docker context inside wsl, then I think this setup will feel even more “light”.

So do not hesitate to test this setup and find even better ways. And share, I’m as usual roaming in Twitter @nunixtech

INFORMATION: after the Docker Desktop for Windows v2.1.6.0, the workaround below is no more needed. The kubectl command will successfully connect to the K8s cluster, even with the DNS entry kubernetes.docker.internal pointing to 127.0.0.1.

In the steps above, we added a K8s on WSL, however what about the Docker Desktop K8s? Can we connect to it from WSL?

Well, yes we can! And except for one little trick, the process is actually very straight forward: 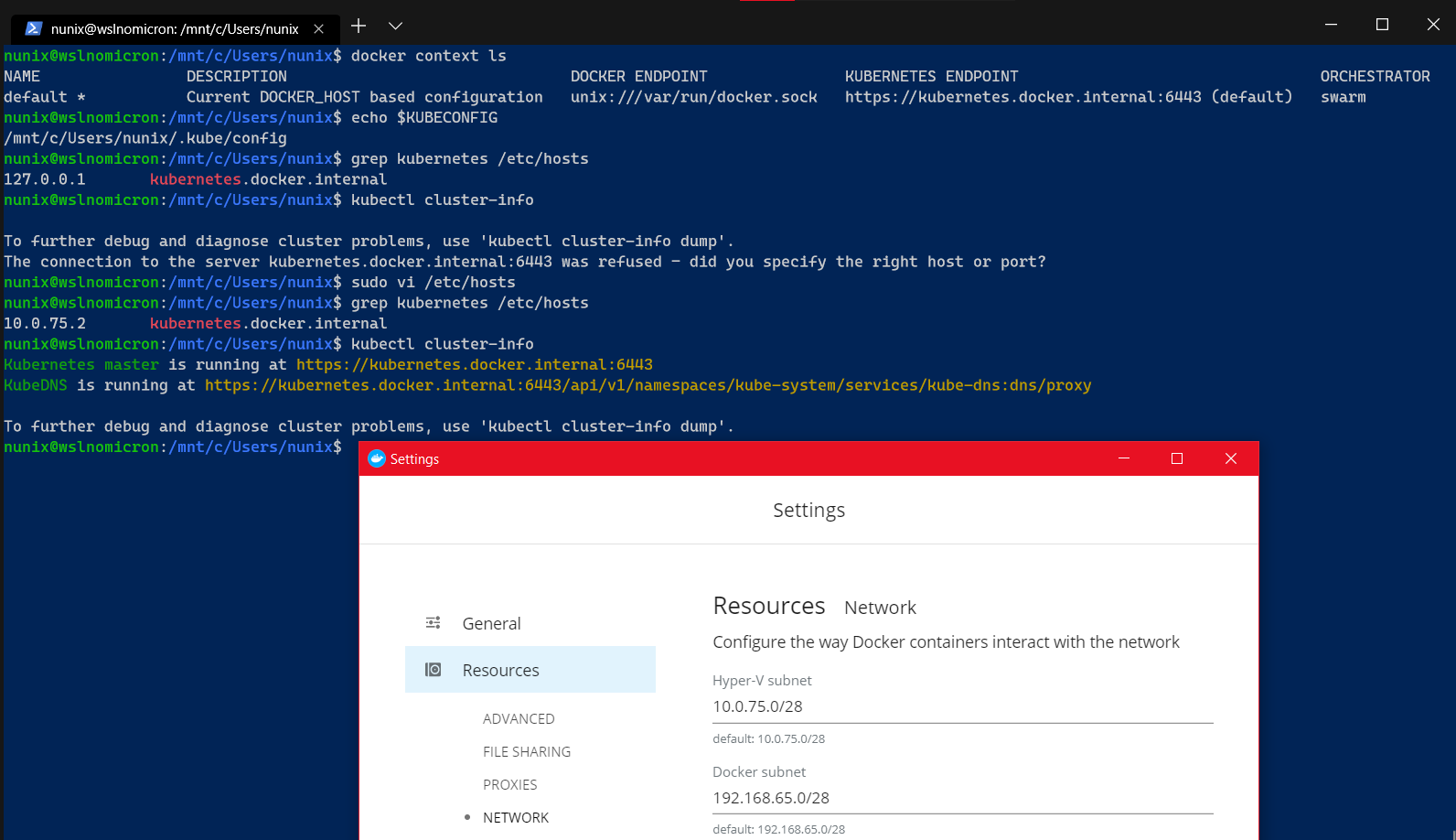 TIP 1: I found the “external” IP of the DockerDesktopVM by looking at the Docker firewall rule “DockerSmbMount”

TIP 2: if you want to avoid modifying everytime the /etc/hosts file, you can set stop the auto-generation by editing the flag at the top: # generateHosts = false

And done, WSL is now configured to connect not only to Docker but also Kubernetes.