WSL2+ZFS: High 5 from the Kernel

WSL and ZFS in the same sentence? Clickbait! … well, if it was just few months ago I would have said: totally.

But we are “in the now”, and not only you will see it applied, but we will move to the Linux Kernel 5.x version (stream?).

Should I go on or it’s enough that you want me to shut-up and just show the how-to? That’s what I thought.

As usual, here is the full list of the prerequisites: 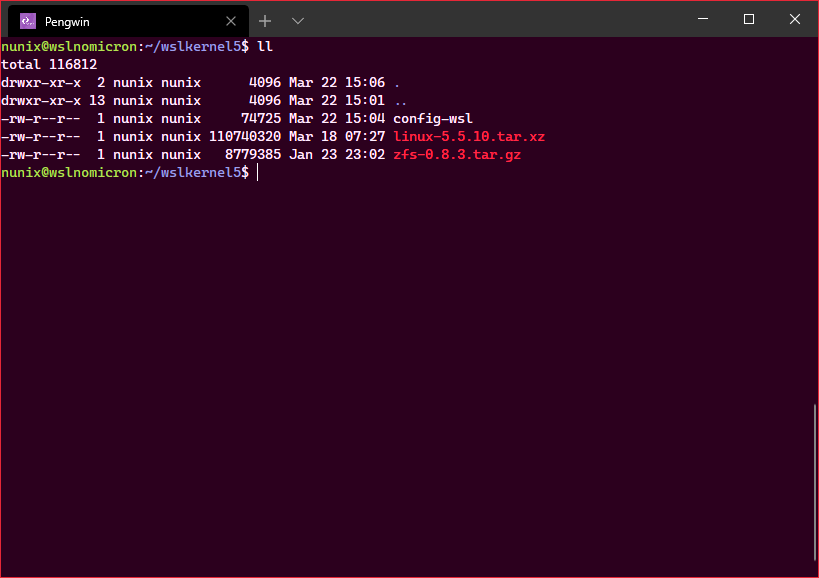 In order to be able to use ZFS, we first need to build a Kernel containing the module. So before continuing, ensure you have downloaded the prerequisites.

Let’s login into our WSL2 shell: 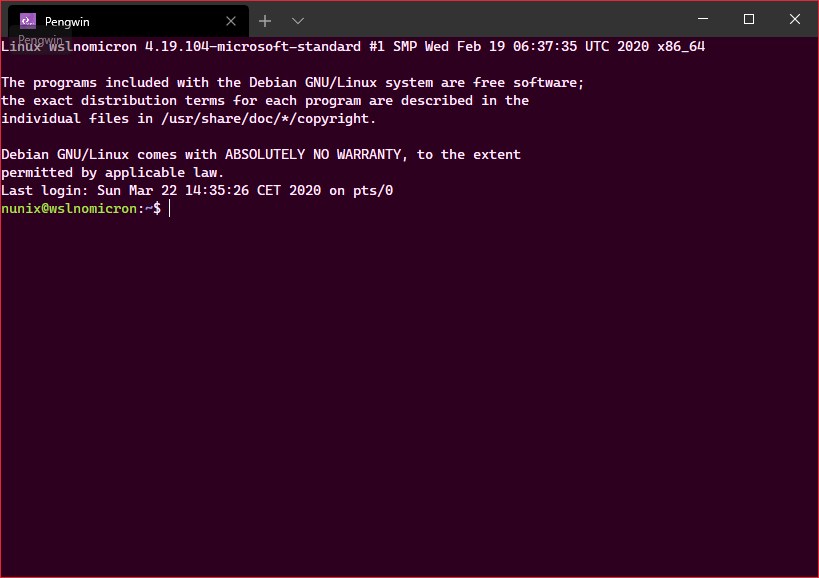 As shown in the screenshot, Pengwin actually displays which Kernel we are currently running on.

If you do not see it or you are using another distro, then type uname -a to see it.

Before we build the Kernel, we need first to add the ZFS module.

Before we can build the module, we need, well, build tools and the potential dependencies.

Thankfully, the OpenZFS community is incredible, and an howto has already been done for an older version, so we will need to adapt it a bit. Let’s go into our WSL2 shell: 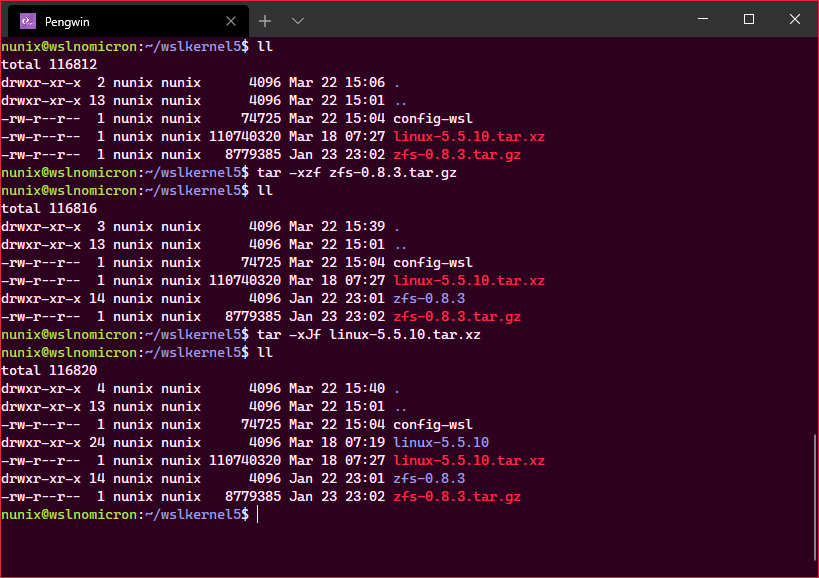 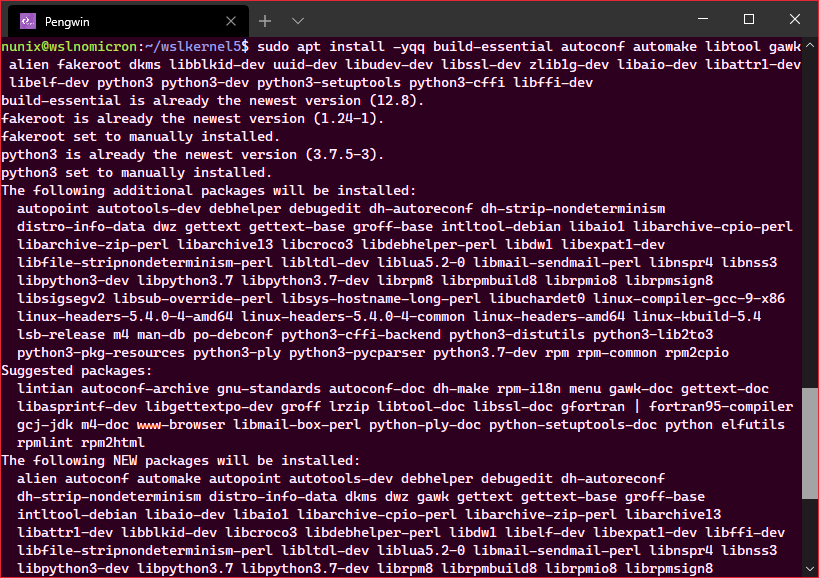 Once the packages installed, we need first to copy the config-wsl inside the Kernel source and run make prepare scripts: 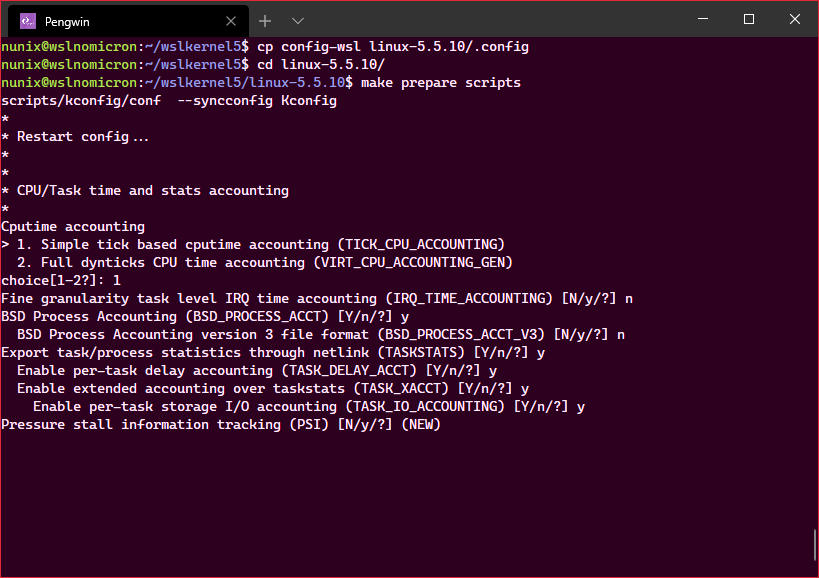 Once the prepare finished, we can build the ZFS module: 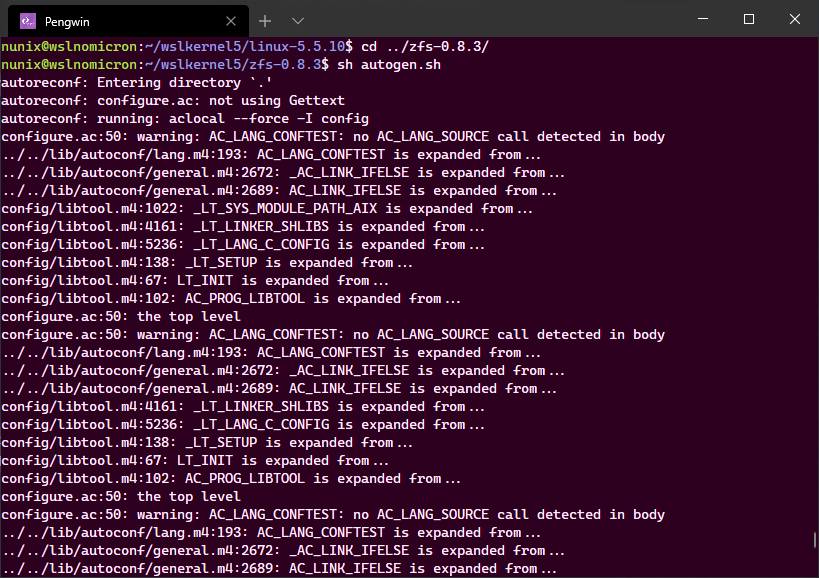 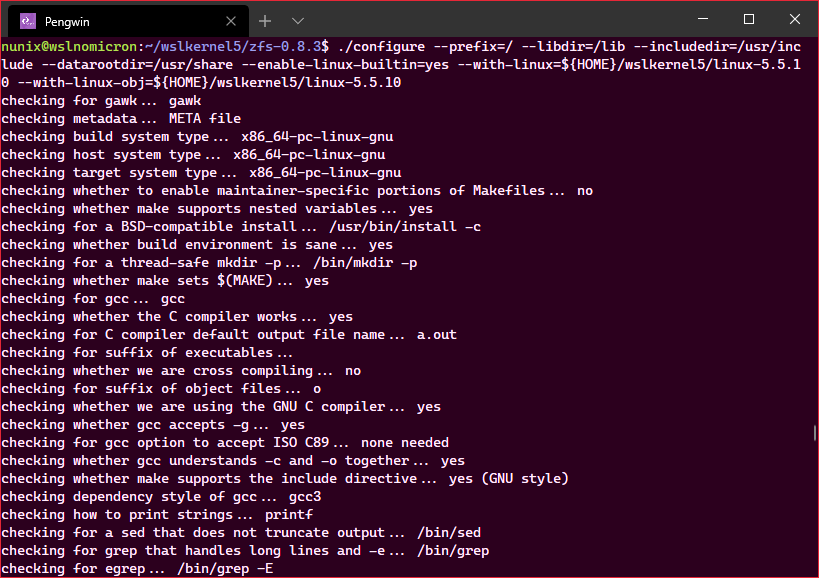 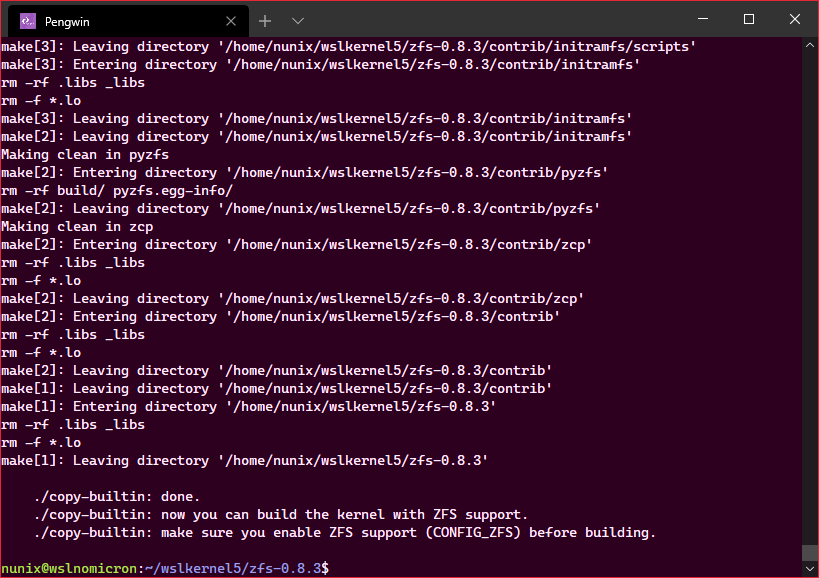 The module has been added to the Kernel sources and we can now enable it.

But before we do that, with all the work done, let’s install the ZFS binaries: 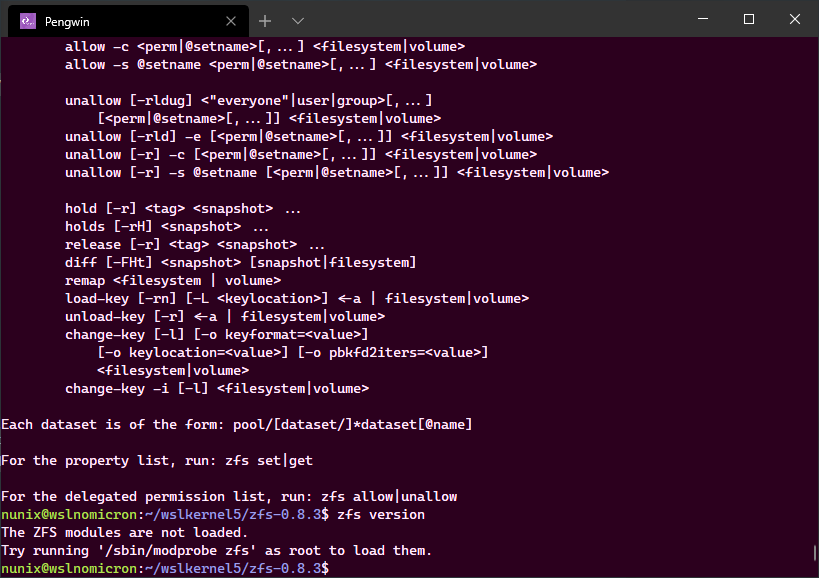 And an error appeared, but that’s OK. This is “good” error and we will fix it in the next section.

We are finally back on the “kernel building track”, and before we can run the so much wanted make (and have a more or less long pause), let’s first change the config file and add the reference to the ZFS build: 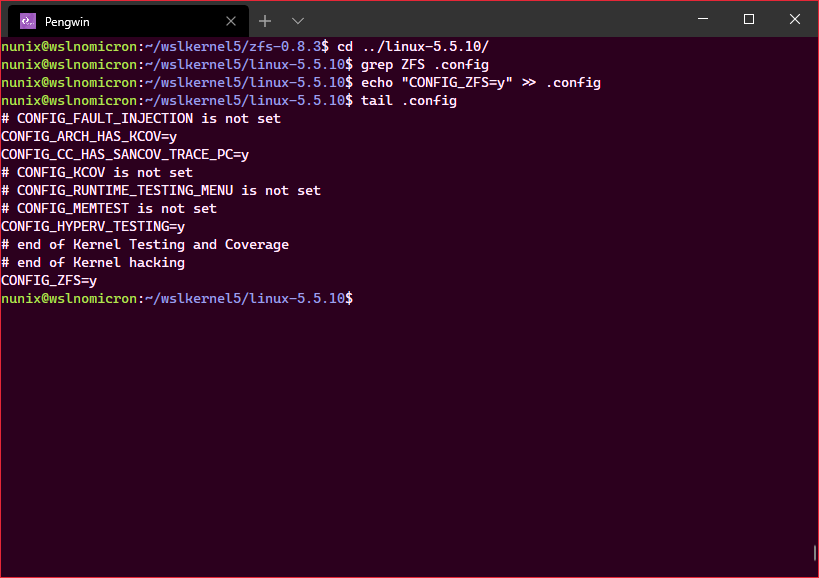 Finally, the time is here to to build the kernel: 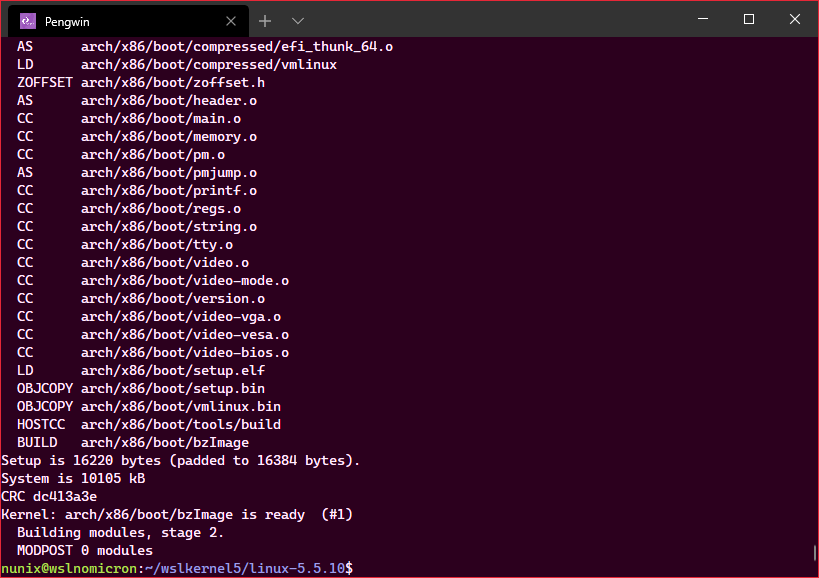 We have now our brand new kernel v5 with the ZFS module embedded.

Before we move on, let’s install the modules:

Now the last piece, we need to use it for our WSL2 distros.

WSL2: The future is now 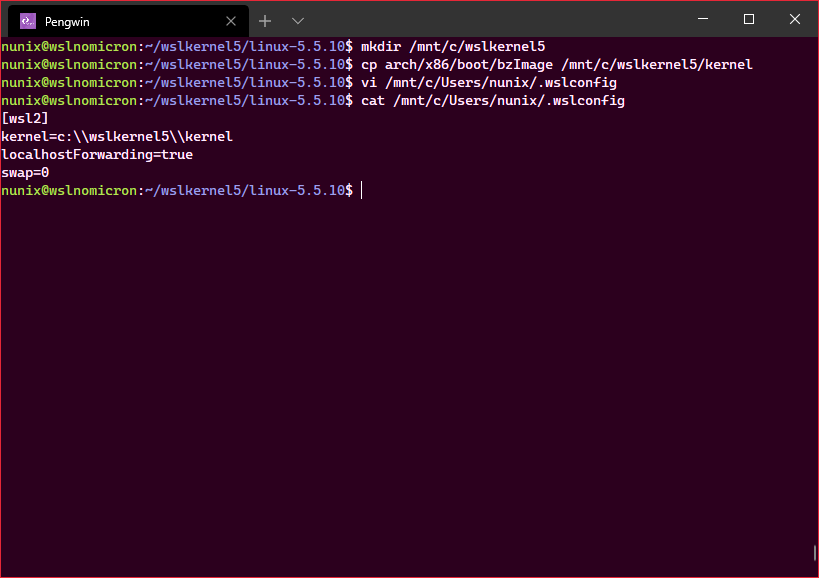 Exit your WSL2 shell and start Powershell as an administrator: 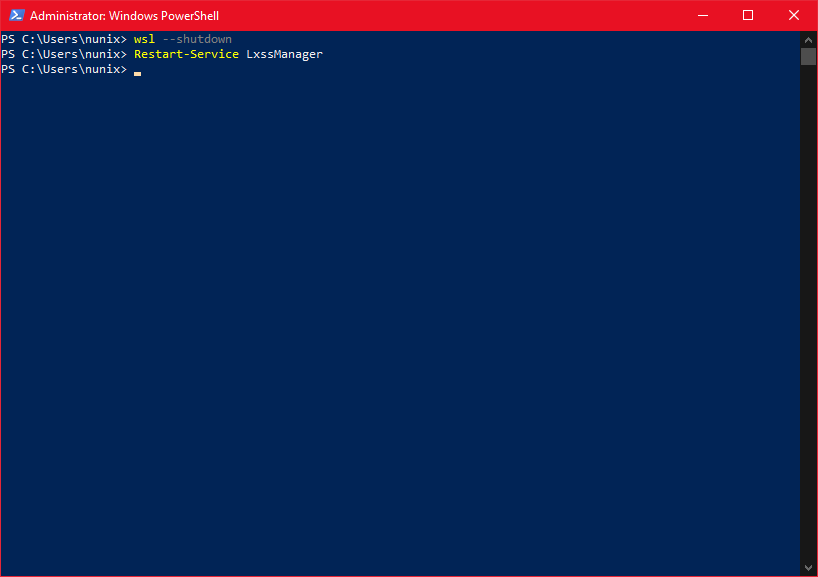 We can finally start again our WSL2 shell and enjoy the new Kernel with ZFS: 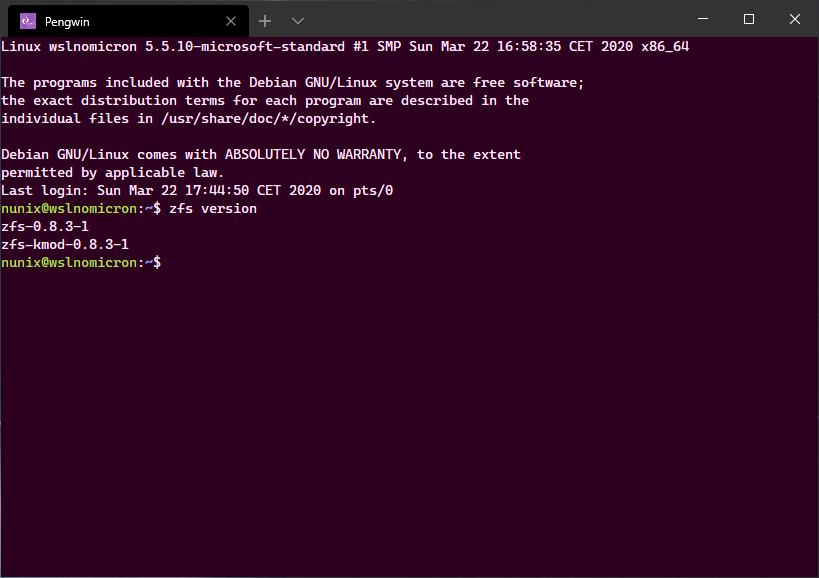 For the ones still doubting: WSL2 is growing at a (crazy) fast pace. And all the build work was made inside WSL2, without any need of a VM or bare metal Linux.

Having the possibility to use the latest kernel, to had modules is something that some persons might have been looking for, and now it became a reality.

I hope you enjoyed this new gem from the Corsair’s chest and see you soon in the vast Linux Ocean … I simply have different ship.

Bonus: one Kernel to rule them all

oh sorry, you thought I was done? well almost, but I wanted to share one last trick.

As you may know (or not), all the distros installed under your user are running in the same microVM. Therefore the kernel and the ZFS module are also available to all the distros.

So, for all my Arch (based) distro loving friends: 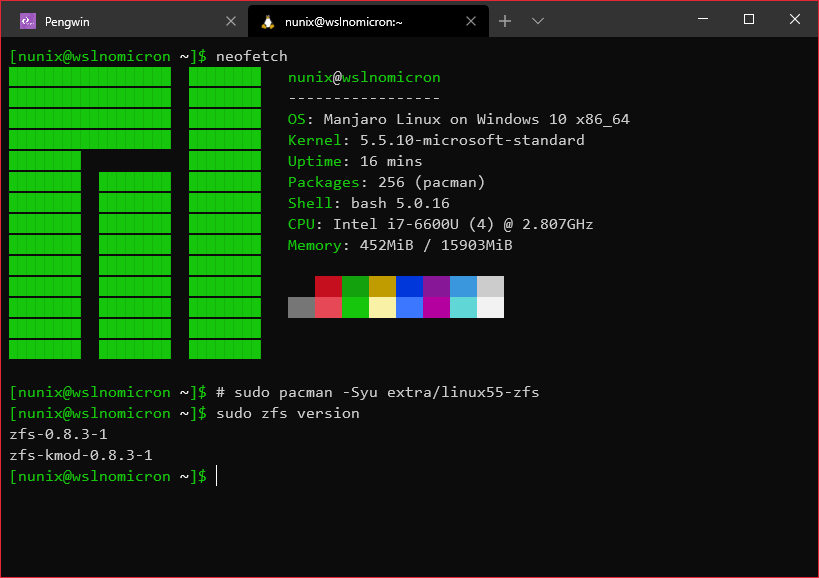 Read other posts
← WSL2+LXD: Let's have some Fun too WSL2+Ubuntu: The Ermine meets the Whale →